Slow Progress is Still Progress – don’t give up too soon 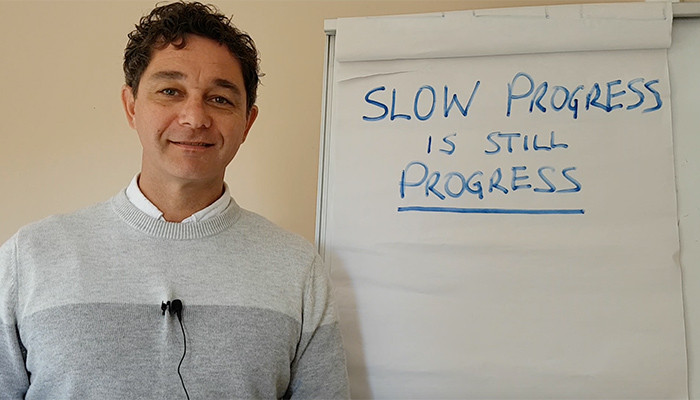 Slow Progress is Still Progress – don’t give up too soon

Hey! Jon here. It’s a bit cold today so I’m wearing my pullover and I want to talk about incremental games or the little wins, or a little bit better is still better.

I’m sure you’re asking yourself, “What are you talking about Jon?” Well, remember that saying, “Rome wasn’t built in a day.” Well, a scaled-up, systematized business that makes you lots of money and that can work without you being there all the time, isn’t going to be built in a day either. I’m sorry. Anybody who promises you that is lying. That’s not a quick fix. It’s not an easy thing to do and it’s going to take you time and is going to take some effort. But, a little bit better sometimes when we’re taking those small steps, it’s easy to feel like we’re not taking steps at all, like we’re not making progress at all and it’s important if you’re making changes for driving change in your business that you step back a little bit and look at the progress you have made and kind of recognize it and celebrate it.

Sometimes it feels like you’re not making any progress at all or that the progress you’re making is so slow that it might as well be nothing. Sometimes we even have to take steps backwards. I’ve had a few knocks in my time that have knocked me backwards and that’s part of the deal. You’re not going to be making constant, happy, fast progress all the time. Life’s not like that and business is not like that.

So the point I want to make is it’s very easy to get disheartened when it feels like nothing’s happening and the wrong thing to do is to kind of chuck it all away and try something else. Again, I see this a lot with people… I’ve faced the temptation myself sometimes but often when we’re doing something and it feels like it’s not working (it probably is) and the wrong thing to do is to chuck it in and try a new thing. You can spend all your time trying things not trying them hard enough or for long enough, trying something else and you end up not going anywhere. So when you feel yourself in this situation where it feels like progress isn’t being made, like you’re not… like the thing isn’t working, you need to be really careful and look at it properly and make a proper informed decision as to whether it’s working or not. It could be that it’s actually going okay and it just feels like it isn’t yet.

RELATED CONTENT: Self Management – How To Manage Yourself Instead of Letting Everybody Else Be In Charge

Remember that the momentum takes a little while to build up off and particularly with things like marketing, particularly with the small changes. If we’re talking about systematizing your business, there might be 150 processes that you need to document but writing the first one still counts. It’s just a long journey. You’ve got lots to do so it feels like you’ve done nothing but it’s important and it’s necessary. Maybe you’re over optimistic and maybe your expectation of how quickly you can get change is bit over-ambitious. Maybe you need to make a few tweaks. Often with marketing, and particularly with marketing, we do tweak them along the way as we see how our real-life business reacts.

And of course, the third possibility is it was a mistake and you shouldn’t have done it in the first time but we shouldn’t be jumping to that conclusion and we shouldn’t be throwing things away before they’ve had a chance to work for us. And yet that’s the one we often go for first, particularly if it’s a bit uncomfortable, if we’re outside our comfort zone, or if it’s costing us money. So think carefully, remind yourself that it’s unrealistic to expect things to start working and start making an appreciable difference to you straight away.

Remind yourself that momentum takes time to build up, and the baby steps are still steps. Part of my job of course as your business coach, is to help you spot the difference between the waste of time or the cock up and the thing that should be working and will work if we keep pushing, if we keep giving it that momentum. Part of my job is to help you know the difference between those two things.

I’m going to leave you with the excellent image of the the Eiffel tower being built on.

The Eiffel Tower was built over 2 years and I love this image of all the various stages of it being built. First, it’s not Tower at all, is it? And no point until the very end. Is it a functional tower? But they’re making progress in more steps, increments, and that sense of making small steps is what we need to take into our businesses.

Thought for the day. See you!