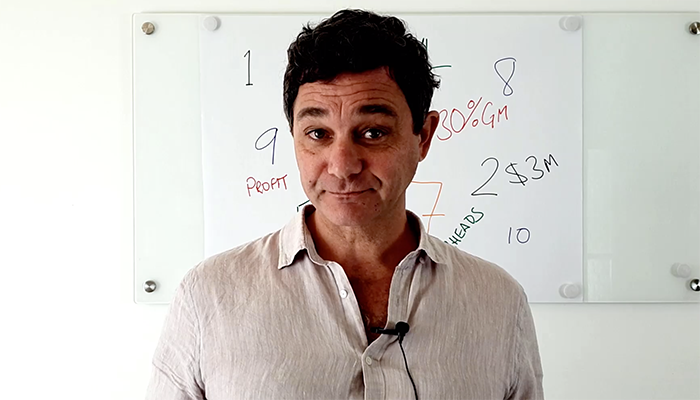 The question here is — ‘Are you profitable?’

This is the last in a series of four videos about the numbers in your trade business you need to keep on top of to make sure your business is healthy.

I’m hoping to persuade you to track them.

You should actually do something about it and not just watched my videos and go, ‘Yeah, I should, you’re right’. Actually DO something.

I’d really like it if you took some action. That doesn’t have to be business coaching, but I’ve also built a series of tools for you to use.

I advise you to:

So, if you don’t want business coaching, at least do that and take some control over your numbers.

In this series, I’m explaining some numbers:

If you do find you want some business coaching, go ahead and book yourself a 10-minute chat.

This week we’re talking about profitability.

Your ‘Big Numbers’ are: revenue, gross profit, and net profit.

We tracked those from your profit and loss report that you get every month from Xero or Quickbooks.

We look at it every month, but remember, if you track your numbers monthly, the data gets old quickly.

It’s useful from a holistic point of view, but it’s not quite current.

The Two Set Of Profitability Numbers To Look At

There are two other sets of numbers which give us more specific and focused feedback.

In the tracker, we take the sum of your annual and labour cost.

Then we take your overheads and break it down from a year, to a month,  to a week, to a day, and even, to an hour, if necessary.

We take your materials cost (which we calculate as a percentage of your revenue) and we map that against your weekly invoiced revenue (which you can get from your Xero).

Every week you get to see whether you were profitable or not compared to your break-even point.

Anything above that is profit, anything below that is a loss.

We get to see whether you’ve been profitable this week or not.

This does a couple of things:

You may have a week of less profitability because invoices didn’t go out this week because of progress payments on projects. If you can assure yourself that’s what’s happening, happy days. You’ve got nothing to worry about. But if you see a consistent problem, go and investigate harder.

In a business I work with, we had three months where we were unprofitable in trade. We lost money three months in a row. But with the break-even, we were trading profitably for most of those weeks.

We were able to notice and reassure ourselves that we were trading profitably. But the reason we were losing money was because we were investing in infrastructure and equipment that was going to allow us to grow down the track.

Profitability over your jobs.

You should be profitable on every job, right?

If you do small jobs (5 – 10 jobs a day) you may take random jobs and test them. Ideally, get to as many of them as you can.

If you’ve got the right reporting systems in place, they’ll tell you.

Whether you do it manually or use your systems like servicem8, or AroFlo to help you, I don’t mind. The point is to check.

If you don’t know that, you might go and have a look at the way you do yo quoting because you should know how much profit you’re quoting into jobs.

Where did it go wrong?

The first thing to know is that you’re not making the money you should.

The second thing to do is figure out why and stop that happening.

Here’s a story about what happened with an apprentice.

Some builders and I started doing this by looking at one of their jobs, in particular.

We found it very difficult to do.

They weren’t keeping timesheets, they were quoting using an estimator and meterage type rates so it’s hard to understand whether labour allowances and materials allowed for carpentry or not.

We thought that we’re doing okay, but almost within five minutes of looking, we saw the rubbish removal allowed for $700 and then they had invoices for more than $1,500.

There was a mistake. There wasn’t enough of an allowance for rubbish removal so right away within minutes, we saw the problem, which of course, throws into question the rest of the allowances and what’s going on.

Now, we’re quite focused on starting to keep timesheets and understanding where the labour goes. That was a 5 minute find.

Another builder client resisted doing this exercise. He was busy and wanted to focus on winning more jobs. He thought it was painful and it took some time to persuade him.

Eventually, he gave in and he did it and he came back to me embarrassed and pissed off because his carpenters were taking a lot longer to build roof trusses than he’d allowed.

In fact, he was down $14,000 for a couple of weeks of work for several guys who went over on what he’d estimated to build the house. He’s glad to be fixing that. There was a big hole in his profit on that job.

A kitchen designer and fitter I work with realized he wasn’t charging for his project management time.

He was putting in lots of time and was absorbing variations. He was generally underselling himself in his expertise.

Then seeing some jobs where he made losses or no money and remembering how hard he worked made him get brave about charging properly — charging for his time properly, charging enough margin on top of the other trades and the materials, and making sure that he made some profit on every job.

Guess what? He’s now in profit and he’s actually gone from struggling to saying “I’ve got about $15,00 in the bank to pay everyone.”

He’s gone from sh*t to where he is growing and building the business that he wanted.

Another builder with a fairly large number of jobs – we did this job reconciliation exercise and there are two jobs losing $12,000 and $25,000, respectively.

As we dug in, he said, “You know when I quote, I’m underestimating the amount of time it takes for the groundworks. I thought it would be easier than it was”.

He’s gone back to his quoting tool and changed the allowances that he makes for the earthworks and the site works so he doesn’t make that mistake again.

Your numbers are important and they’re useful.

They’re useful insights into what’s going on in your business and I want you to pay attention to them.

I know this is a bit of work.

You don’t have to do it all — your bookkeeper, accountant and admin people can do the work for you.

There are many ways to get this stuff to happen, it doesn’t all have to be you.

Virtual Assistant VS In-House Admin Person – Which is best for tradies?