You’re a Bottleneck. What to Do? Jamie’s story 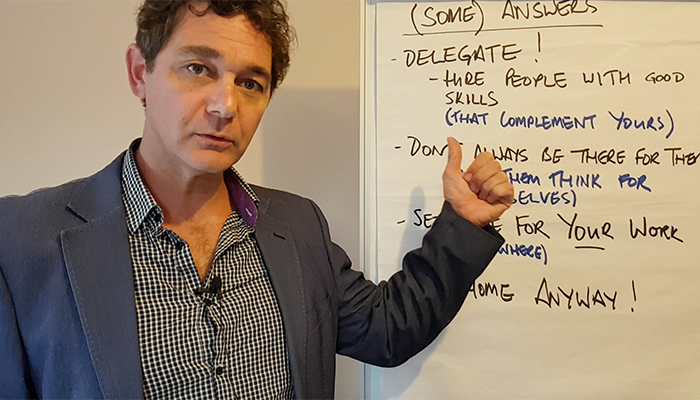 You’re a Bottleneck. What to Do? Jamie’s story

You’re a bottleneck in your business, just as I am in mine.

And I’m going to talk to you today about how to delegate, how to make yourself not such a bottleneck. Because if you want your business to grow, you don’t want it to be limited by your personal ability to do work and stuff.

I thought we might find out more fun for change.

So he’s called Jamie, he runs a successful business – I wouldn’t identify more than that. He’s got six guys in the field installing and there were three people in the office.

Now he’s got stuff – he’s got six guys in the field and as I said he’s got people in the office, three people answering the phones, doing the bookkeeping, scheduling jobs, and doing the general admin. And he’s still very busy.

Now this is an ongoing process that we’ve been working on together.

So what are his issues?

And that’s great. It makes them feel very useful and important but nothing gets done that he needs doing.

So we’ve done a couple of things…

He’s hired an Operations Manager to take a lot of the load of the work away from him.

He’s taking a few months to train this guy and be comfortable enough to hand stuff over but now that’s done and that process is completed and it’s been a few months. He’s now removed a third of his workload.

And this is something for fun that he did, he kind of stopped answering his phone.

He’s made himself less available to everybody and doesn’t instantly call them back or instantly respond when they call. He leaves it for a while if he’s busy doing something else, he’ll do that.

And of course what’s happened? His people start thinking for themselves instead of waiting for him to think for them.

Seriously, they actually do that. So a lot of the phone calls that he would previously have taken and dealt with, end up going away, he doesn’t need to do any work at all because people sort it out without him.

If he goes into the office he gets nothing done, so what we’ve done about that is we’ve carved out time for him to do the work that he needs to do, whether it’s the marketing or thinking about the strategy, or talking to me or, putting quotes together so he’ll go and sit in a cafe or he’ll go home and spend an afternoon at home instead of being in the office where he’s kind of available to everybody.

He’s still got a massive list of stuff to do and he doesn’t get through it all of course because it’s massive.

And what we did about that was we hired him a PA. So he’s hired an assistant, an assistant to the boss to do all the admin and shit bits that he’s not very good at.

And what that helps us do is take off the work that he’s not greater and give it to somebody who’s good at it, somebody admin focused, somebody with IT skills or better IT skills, somebody who can type. I’d say he’s now dictating his quotes into a voice recorder, emailing them to her, she’s typing them up, saves him 20 minutes or half an hour every quote.

You know she’s doing the computers, she’s doing the emailing and she can filter through his emails and get rid of the rubbish and ask him about the ones she doesn’t understand. So she’s taking a lot of that boring admin function away.

This is not a big business by the way. She’s only part-time, so she’s not terribly expensive. We’re not talking a multi million-dollar business here. We’re talking a normal sized trades business.

And one more thing, we’ve got him going home at 5:30 anyway whether it’s all done or not.

I know that doesn’t work everyday of course but it is working. He’s going home at 5:30 or not much after 5:30 instead of staying till 9:00 and 10:00 o’clock at least some days every week because he made a commitment to me and to himself to do that. So he’s getting some of his evenings back, his wife’s happier, his kids see more of him and he’s liking life a bit more too.

RELATED:Self Management – How To Manage Yourself Instead of Letting Everybody Else Be In Charge

So we’ve come at the problem from two angles:

So just to summarize the problem:

So what should you do? What are the answers or some of the answers, Jamie’s answers?

So if this sounds like you – overworked, control issues, working long hours – you’re not alone.

Most trades business owners and most small business owners perhaps including myself, are a bit guilty. And you can fix it. You can take steps to make your life and your business run better and more without you needing to be there all the time.

Of course, if you want me to help, I’m sure you know what to do.

I hope it’s obvious somewhere on the screen there for what you should do.