The Hidden Costs of Employing Contractors (vs Employees) 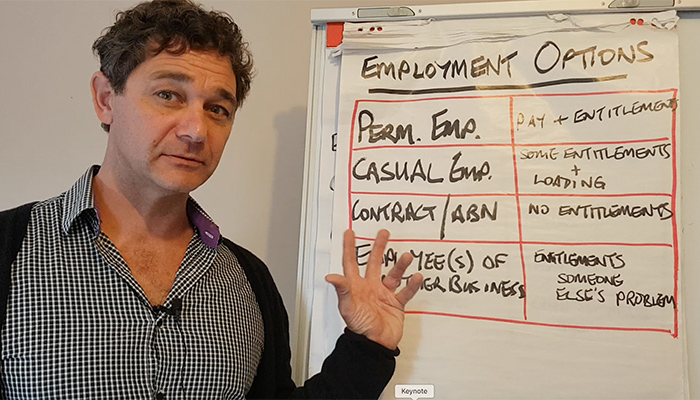 The Hidden Costs of Employing Contractors (vs Employees)

This is the ‘True Cost of Employment (Part 2). It’s a follow on first video that was about how much people actually cost you in monetary terms and comparing that to what you can charge out for them. This is more about the human side of things and of course the way in which you employ people.

I talked in the video about employment versus contracting and people have been asking me about the differences between the different ways you can employ. So here we go.

There are four ways to employ people in this country, Australia.

I’m going to try and help you be clear on what the differences are.

Part of that is knowing what the rules are, and part of that is getting the most of your people. And this kind of covers both of it.

So to clarify, permanent employees get paid an hourly rate usually and they have some entitlement, don’t they? They have holiday pay, they have sick pay, they have superannuation that you have to pay them. They get paid public holidays, parental leave, and they have protection of their employment. You can’t just fire them if you feel like it. They can claim unfair dismissal, all sorts of things. So permanent employee comes with some responsibility as their employer, doesn’t it?

The casual employee releases you from some of that responsibility in return for extra pay. They get casual loading and there are very clear rules about what you’re responsible for and what you’re not. So you don’t have to pay them holiday pay, or sick pay, or or anything like that. You do still have to pay them super and if they work for you longer term than what a court might consider casual, then they’ve got protection still. So they’re still protected from unfair dismissal. If you have people on contract (and this is why the government doesn’t like it) you don’t get many entitlements, you just give them money, and you’ve got no responsibilities for them at all. And that’s not really allowed, and if they’re employed as an employer of another business or even their own business as an actual contractor, then they’re entitlement is somebody else’s problem even if it’s their own businesses problem. So that’s fine as far as it goes.

But… the rules about what the ATO considers what makes an employee and what makes a contractor. They are very clear (I got this from the ATO website) and it doesn’t matter whether they work under an ABN, and invoice you under an ABN, or whether they work for a proprietary limited company that they own (when you might think you get away with it) actually these are the rules. And they’re the rules and if the ATO says it’s an employee, they’re an employee (your employee) and you just gotta suck it up.

An employee can’t subcontract the work to somebody else and a contractor can pay the people to do the work.

An employee gets paid for his time and a contractor does a quote, gets his quote accepted and gets paid on BAS.

An employee uses your tools, a subbies uses his own or their own.

With an employee there is a commercial risk, so the risk of it getting done wrong and somebody having to go and fix it up, that’s on you. With a subcontractor, that’s on them.

An employee works mostly in your business and a contractor works on their own.

So here’s the wrap, if you are hiring somebody, more or less an employee, and the government or the ATO turns around says ‘no they’re a contractor’, you’re in for some pain.

You’re going to get fined, you’re going to have to pay the super that you didn’t pay them because you thought they were a contractor but they’re an employee and you might get stung for the tax that you didn’t deduct from their pay and pay to the government or to ATO as PAYG. So you could be in a whole world of pain right.

Remember, I talked about the implications for culture or all the human results, human effects when you employ somebody on the permanent basis. You kind of say, “I accept some responsibilities for you, we’ll look after you, and we’ll give you a holidays we’ll look after you when you’re sick and still paying all that stuff.”

With a casual employee, not so much. You kind of say, “No we’ll pay you a bit extra but you can look after yourself, f%#k you a little bit.” This contractor thing ,you’re saying “fuck you” a whole lot, aren’t you really? “Sort yourself out, here’s your money. I don’t care.”

So that’s an interesting way to consider things, is it not?

And I’ve got one little summary table for you here because I quite liked it. 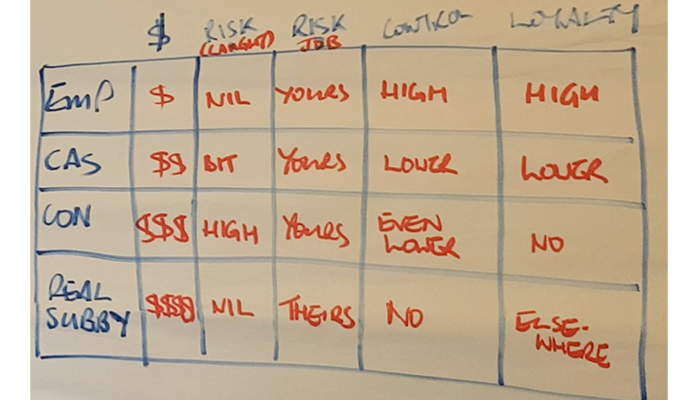 With an employee they cost you a bit less but you carry more risk and more responsibility, the risk of getting caught is NIL, the risk on a job belongs to you, your control is very high and the loyalty is very high. They’re on your team.

With that sham contractor, they cost you a bit more, the risk of getting caught is quite high, the risk of a job still yours because they’re not likely to have insurance and all that stuff. The control is very low and the loyalty (you know there isn’t any, right?) they are looking over their shoulder for the next job, just like you’ve said if there’s no work on Monday, bad luck. They’re probably saying, ‘Well, if I find a better job somewhere else, bad luck to you too.”

And with a real subby, you’ve subcontracted, you’ve really done it properly by quote to a contractor, that’s great.  They cost you more, the risk is none, the risk of the job is less but they’re costing you lots more but your control is none and their loyalty or the loyalty of the people on your job site are elsewhere, aren’t they? They’re to their own employer.

So you’re really just shuffling loyalty and risk and money around with this little table. And that’s fine. You’ll get a clear indication in a moment of what my opinion is on how you should do this.

Like I said I’m a coach, and I help trades business owners build the business that they want, that you want which normally means money, and scale, and freedom, and to get those things, you need to have a great team.

You’re reliant on your team and if you say, “F%#k you” to your team or even you know, “You’re not part of my team, you’re just a subcontractor,” then you’re not making the most of your opportunity to have loyal and committed people.

Now I understand it’s different for a builder, so we leave builders out of this for the moment. That’s normal modeling.  I’m not really saying “f%#k you” by using contractors but if you do that for your core team then you are alright.

So let’s talk about your core team here. You get to grow your business and scale it, and be able to free yourself from it a bit by having a loyal and committed team.

In business coaching that comes with leadership and with management but it also starts with the statement you make on how you engage them.

So I think it’s clear, you should be hiring people as employees and you should be meeting your responsibilities. If you don’t, you’re saying “f%#k you” and before you say, “We can’t afford that Jon, it’s too expensive.” I’m calling bullshit. People pay extra for better stuff all the time. People buy BMWs and Hilux Utes and that Great Wall utes or Kia cars all the time.

What kind of business do you want?

Do you want to own and run a business that looks after people and gives and gets loyalty and commitment in return?

Or do you want to run a business that says “f%#k you” to people and gets that in return from them?