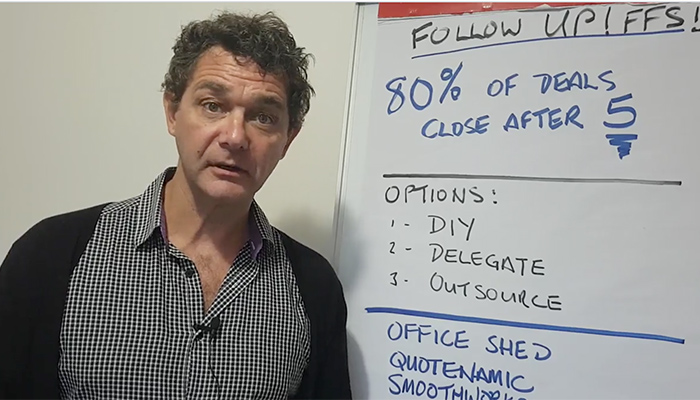 I bet you don’t. Or not properly, not well, and not every time. And the reason I say that is most people don’t.

Most of my clients are a bit haphazard about following up their quotes. I’ve been a sales professional for 20 years before I was a business coach, and I could be better at it. I’m guilty.

But if you ring them up they might say, “You’re not getting the job.” You get rejected  and all those bad feelings. You can also feel like you’re a bit of a scumbag, can’t you? “Please Sir, can I have some more? Please.” Alright, can I have some business?

So you can feel a bit weak and begging like Oliver Twist. And it can be a bit thankless. You can spend a lot of time leaving voicemails, leaving messages, talking $#!t to idiots. So it can be and it can feel like a colossal waste of time. So what happens is, it’s easy not to do it.

Now, I’m Jon from Small Fish Business Coaching. I run the ‘Tradies Toolbox’ Coaching program. I help trades business owners grow and scale. Part of growing and scaling is winning more business. And part of winning more business is being disciplined about things like following up. People like me say that following up will help us win more jobs which of course sounds obvious.

Now, I found an actual statistic from HubSpot which is one of the market leading internet marketing companies. And they say, 80% of sales closed after FIVE discussions or FIVE follow-ups. And 40% of sales reps give up after one follow-up.

So if you don’t make at least five phone calls to somebody, you could be missing out on 80% of the work. Particularly, I think this might be true in a trade where the first kind of quote often starts with just an idea. “I wonder if we should get the fence fixed.” That kind of thing. So it can take time.

I’ll tell you a story of my own recent purchase decision. The washing machine broke last Wednesday. And we urgently needed a new one. The stuff starts piling up so Michelle made a few calls. She called the good guys. I think she looked at somebody online. I came home and she said, “We need a new washing machine. I’ve looked at one here, it’s this much. Do you think we should drive to Ballina and get one?” And I said, “Let’s look at appliances online.” And I looked at someone else. And then at the good guys again. And then another website and then went back to appliances online. And we placed an order.

So within the space of three or four hours we talked or engaged with businesses four or five times before we went, “F#$% it, let’s buy that one.” And that’s just a washing machine. They’re all the same. A very simple, quick, urgent decision, right?

So if we’re interacting five times before we make that small decision, other people with a bigger decision to make are interacting more times, right?

So my personal experience, lends support to what HubSpot is saying that lots of sales happen after the fifth encounter, the fifth touch point, or the fifth follow-up.

If you’re not following up, you’re missing out on a lot of business. And you shouldn’t do that because you’ve spent the money to get the lead and you spend the time and energy to do the quote. You should get the follow-up happening.

And I say those words carefully, “You should make it happen.” You don’t necessarily have to be the one who does it, do you?

So back to how difficult and shitty making the calls. It’s a bit shit. It’s not very fun. You don’t actually decide not to do it, do you? You just kind of defer the hard ones. And most of us will call the nice people that we liked. All the ones we feel are hot to trot and are going to close the deal. I know I’m guilty of this. And I won’t call the ones didn’t sound that interested. I’ll make an excuse or I’ll put into the bottom of the list and probably never get to him. Or call him once. And then we won’t follow them up again because it’s boring feels a bit thankless and pointless.

Recommended Reading: When Customers Go Quite on You.

So what do I suggest, Jonny the business coach?

I’m going to suggest that you follow up every single quote at least five times or until the person says, “No, thank you.”

I would follow them up and ask them to make a decision. Remember, this is part of a sales process. So you should be following people up five times or six times before you give up.

Your business should be doing that. So let’s say we’ve established that five follow ups is important before you stop calling. If you’re very small and you don’t have much money or you’re starting out, you’re going to have to do it yourself. Bad luck. Suck it up. It’s probably worth the time. And I know we’ve kind of got this mental thing going on where it’s kind of easier and more exciting to go out and see a new person, and feels more hopeful and positive. But it is worth investing the time and effort in those follow-ups.

I make my own follow-ups or most of them. Although, I will say that doing this video made me rethink and I’m going through a process now with Lindsey and Venus where they’re doing some of the follow-up work for me.

So I’m in the process delegating it to my team. So if you’re not too small and you have a team, that’s another option. You can get someone else to do it. You can delegate it to one or two of the people who work for you and they can learn to do it. They’ll never do it quite as well as you. But given that you’re busy and spread very thin, they’re probably do it more consistently and with more discipline than you. That’s certainly the case for me.

So if you’re not great at the calls and you don’t like it, and you can acknowledge to yourself that you kind of defer it a bit, get someone else to do it.

Alright, most business coaching comes down to this kind of choice, right?

And I’m going to talk through those three options here. And this is often what we do when we’re business coaching. We’ve decided what needs doing and then we have to work out.

So here are what the options look like for following up on new quotes.

So my client Jamie who makes garage doors in Wollongong, he’s got three people in the office and one of those people follows up every quote religiously with discipline. She’s very good at it. She’s very consistent. She talks to people nicely. She closes a lot of business and he has a very successful garage door installation business.

So that’s one way. She’s quite expensive. She’s a full paid, full-time person. I don’t know how much of a job she spends doing this, 10% or 20%. So it’s costing him bit money to have this happen. But it’s working for him, right? She’s winning work.

So your staff can do it if they’ve got the skills. You teach them how to do it if you work it out together.

And another option, is to outsource it to an external agency who says, “We’re good at this.” And I’m going to talk to through 2 or 3 that I’ve come across, that I know.

I’ve mentioned Office Shed before. They’re my friends, Jay McClure, and she has a team of admin people that are all women. So I’ll call them girls who will do lots of admin type of work for you including following up on your quotes, and saying, “You’ve got the quote are you going to book a job in?” It’s relatively simple to do. And they’ll do that for you. They cost about $50 an hour. And it’s like hiring part of a person, right? You can say, “I’ll have two hours a day and pay $50 an hour so $100 a day.” And it’s a bit cheaper than hiring.

I recently met these people, Quotenamic and that’s all they do. They follow up your quotes. So this guy runs a successful trade business. He’s moved on from that into this new business that he’s setting up. He set up a team in the Philippines who are relatively inexpensive. And they will follow up your quotes for you for a only $100 a month. Now, there’s a limit to how many calls they’ll make for that money. But for a $100 a month, they’ll smash through calls and follow-up all your quotes. And he tells me that it lifts people’s close rates quite dramatically. So that’s another option – a cheap option.

And Smoothworks is a friend of mine. We also have met recently through my networking. And he does something similar. He’s got people in Australia. He uses some software to manage what he doesn’t have, people who will follow up quotes, and chasing them for you.

So frankly, I don’t think there’s any excuse for you not to do this. If you want to grow up as a business person, build a proper sales process that brings you good margins, that closes more deals without so much angst and stress and one that helps you take your business to that next level, then you should be doing your follow-ups.

And if you want help with that broader sales process, of course, you should be talking to me.