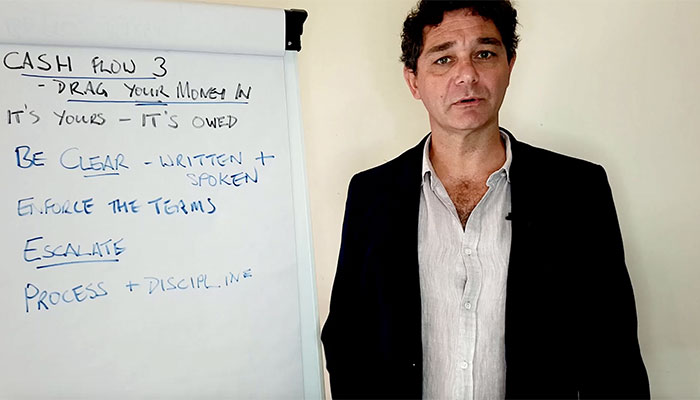 An Overview of Previous Episodes

In Episode 1, I talked about Deal flow, how having enough marketing and sales so that the business keeps coming in, which is, of course, great for your cash flow, bringing cash and profit into the business. I also talked about how an important part of that is having enough margin so that your work is profitable so that it does bring money into the business and leave some leftover for mistakes. Margins and Deal flow are important.

I also talked in Episode 2 about how important it is to actually really know your margins, not to have your pricing and your margins based on guesswork about what your costs are or assumptions, but to actually go through and check. Check on the way in as you do your quotes, and then check again on the way after you’ve done the work whether you did actually make that much profit, whether you did actually take as long or use as much materials as you quoted for.

Dragging You Money In

Today, we’ll talk about dragging your money in. This is another way you can help your cash flow. The crime I see people commit is to do work, raise their invoice, and leave it, and let it dragged out and not get paid and be owed a considerable sum of money. It would be nice if you did work and you got paid immediately, like you might in a restaurant, like this lovely image of somebody going to a restaurant and getting up from their dinner and going, “that was lovely, thank you very much. Email me the bill and I’ll sort in due course.” You’d get laughed out of the room, you wouldn’t make it out of the door.

And yet for a trades business, that’s what’s expected. You’re expected when you’re finished doing the work, to raise an invoice, to hand it over and to wait for them to pay in their own good time. I don’t think that’s fair. I don’t think you should do that if you cannot do it. I’m very aware it’s not that easy but I’m going to talk about some situations, how to make that situation better and creep towards getting paid sooner.

There are 2 things I want to talk to you about.

My main point here is being really clear what the rules are and again, I see people not doing that. If you’re not clear, how can you expect your customers to play by those rules if you haven’t agreed what the rules are?

Trades To Consumers Or Small Businesses

If you do small jobs, whether it’s to consumers or to businesses, I see no reason why you shouldn’t demand payment on the spot as soon as the job is finished before you leave. You can do a fixed price quote. You can send it by email. You can tell them what the terms are, that you’re expecting payment before you leave and if they agree to that, you are very likely to get your payment. There are systems you can use:

All sorts of things around to make this a very easy thing for you to do. So I see no reason why you wouldn’t do that for almost all your jobs.

It’s more difficult if you’re doing large projects, building houses or something pools or whatever, you might have progress payments or commercial projects. But if you’ve got them to commit progress payments, you need to have very clear terms that say something like, “if you miss a progress payment, we’ll stop working”, and then you need to stick to your guns. They’ll soon be on the phone when you’re not on site saying, “why there’s no one on site?” And you can respond quite naturally with “why is there no money in my bank? That’s what we agreed.” Remember the whole power of this is going back to, “this is what we agreed, you haven’t met your side of the agreement. I stick to my side of the agreement.”

You’re not being a prick, you’re sticking by the rules that you agreed upfront which goes back to this, ‘Be clear, write the rules down’. Make sure your customers understood them whether it’s a consumer or a builder or business. If you’ve agreed on the rules upfront, it’s much easier to expect somebody to stick to them and to enforce that.

Recommended Reading: How to avoid conflicts by using a proper communication system

It’s more tricky if you’re working with somebody like a builder if you’re subcontracting to a builder or something like that when you’ve got a long-term relationship and you understand that they’re under some pressure themselves from customers not paying them, and where general expectation is a bit different. You will give trading terms and it’s a stronger expectation that you will give them a bill and they’ll pay in due course.

But the same thing can be true. You’re in a relationship. You can:

You’ll get better results than if you don’t do this. There are no absolutes here.

What you will do, you will drag your money in faster and you will drag more of it in sooner. There’s no absolute. Nobody will ever piss you around again. So, you do have some power to agree or negotiate your terms and then expect somebody to stick to them.

If the bill is due on the 10th and it’s not paid on the 10th, be on the phone on the 11th saying “where’s my money?” The person who’s calling every day when a payment is overdue is the one who’s getting paid first because ‘I want you to shut up and leave them alone’, and it’s an accepted truth in business that it’s those people that get paid and the ones who let it slide are the ones who suffer and don’t get paid.

If someone doesn’t play by the rules and the ringing them up doesn’t work, and they don’t pay you, and it goes beyond 30 days or beyond 45 days, escalate. Have a written documented escalation process and stick to it with some discipline. If that’s sending to a collecting agency or if that’s a phone call followed by written notification that you intend to send it to a debt collection agency if they don’t pay by Friday and then actually sending it to a debt collecting agency and invoking the power of the law.

You do have some protection. Remember you’ve signed a contract even if you had a written quote that got accepted in writing, you have a contract. So, they’re legally bound to pay you unless there’s a legitimate dispute, you’re in very good shape if it doesn’t end up going to court. And usually, it’s the threat and the discipline, stepping through the process that makes them pay. You’re not usually going to have to pay them and end up going to court.

You don’t have to do this, there are agencies that will do it. They’ll do it for 10% or 20 % of what you’re owed. So I really heartily suggest that you write one of these systems down and you stick to it every time.

Of course, if you want some help, talk to me. Put yourself a 10-minute chat and I’ll talk through what rules you might decide, and your terms and conditions of your trade.

There you go. See you.

Virtual Assistant VS In-House Admin Person – Which is best for tradies?