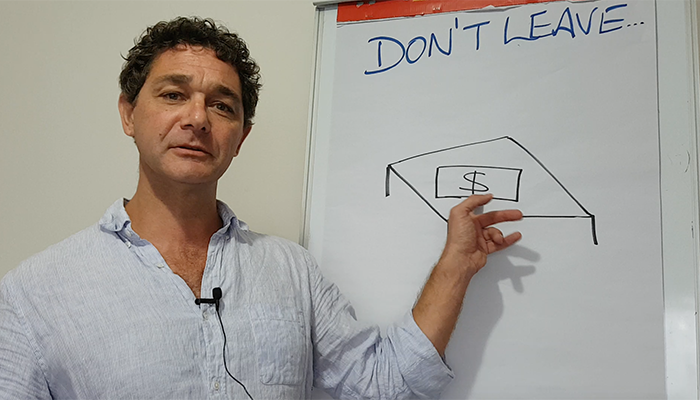 I had a funny experience with a client called Mark.

(I’ll probably get a phone call from Mark at some point when he sees this video.)

We were sitting in his car mechanic workshop in Mona Vale.

We’re doing our coaching, sitting at reception, and an old guy came in to pick up his car. And we got interrupted for a minute (as you do when you work in a small business). You can’t always give yourself away for coaching for an hour or two.

And the guy had a little fistful of notes, and he peeled one off, tucked it back in his top pocket, and he gave the rest to Mark.

He looked a bit sheepish and embarrassed. And he went, “You know, I shouldn’t do that, should I?”

Now, my name is Jon. I’m from Small Fish Business Coaching. I run the ‘Tradies Toolbox’ coaching program. And I help trades business owners, like Mark, grow and scale their businesses and make more money.

And one thing you need to learn not to do if you’re going to grow and scale successfully and profitably, is discount and leave money on the table for someone else to pick up. It’s a no-no, right? That’s a definite no-no.

Do not leave money on the table. Someone else gets to pick it up and you don’t. And that’s a bit shit because your business needs money, doesn’t it?

And if you don’t make profit and you just give it away unnecessarily, which is what I’m talking about here, then you’re jeopardizing your chance of a successful and happy and healthy business.

Now, Mark came to Byron not long ago and he got in touch.  Obviously, because he knows I live here. He said, “I’m here Jon. Let’s have a beer.”

We caught up for a beer. It was very nice. We talked about old times. We talked about his business and how it improved of course, what he’d taken from our coaching, which it had been a few years ago by now.

And he said, “I don’t discount anymore Jon. That was one thing I took from the work we did together. I used to be a bit of a discounter and now I’m pretty confident, the price is the price, and I stick to it, and people pay.”

And he said, “And as a result, I’m making more money and my business is more profitable and everything’s better.”

Now, I feel quite proud of that. It’s not the only thing we did. But I certainly feel proud of the fact that Mark’s business is in better shape than it was when he hired me. And I’m quite pleased and proud of the fact, that we’re still friends, and we catch up, and have a beer from time to time.

I told Mark this story about him allowing that guy to put 50 bucks back in his shirt pocket but he didn’t remember. He looked a bit embarrassed but he didn’t recall. It sticks well in my memory I tell you. We had a bit of a laugh because the beers were kicking in by now.

So my question to you is, do you do this?

Now, it doesn’t need to be as obvious as it was for Mark as leaving it actually, physically on the table or watching someone put money back in his pocket from what he was expecting to pay. Mark had told him it was going to be $450 and he gave 50 bucks away.

Now, if one of your mates came and said, “Can I have 50 bucks?” You’d probably think twice about giving it to him. But Mark gave it to a virtual stranger unnecessarily.

Recommended Reading: Mates Rates – It’s a Discount Request. How to say NO in your negotiation.

There are many ways of discounting or of undervaluing or devaluing the work of your business, or your guys, or what you do. And when you do that, that’s what you’re doing… You’re leaving money on the table.

And you’re costing your business the profit that it needs, the lifeblood that it needs. You’re kind of saying, “I wrote this down, we’re not really worth what I said we were going to charge. We’re really under worth this much.”

You’re devaluing what you do. And that my friend is poison, so don’t do it. Stop doing it.

And I’ll give you another minute or so on how to stop doing it.

And the answer of course, if you’ve watched my videos before, the answer lies in process, and discipline, and being methodical.

I’ve said it before, I’m sure I’ll say it again.

Have clear rules about what the prices are, about how you calculate them.

And a pre-written process is much more compelling and persuasive to somebody than you kind of winging it. So don’t wing it. Pre-prepare.

It’s not hard, is it? It requires a little bit of discipline, that’s all.

So that’s it for today. My little passionate complaint about not leaving money on the table. Please don’t do it.