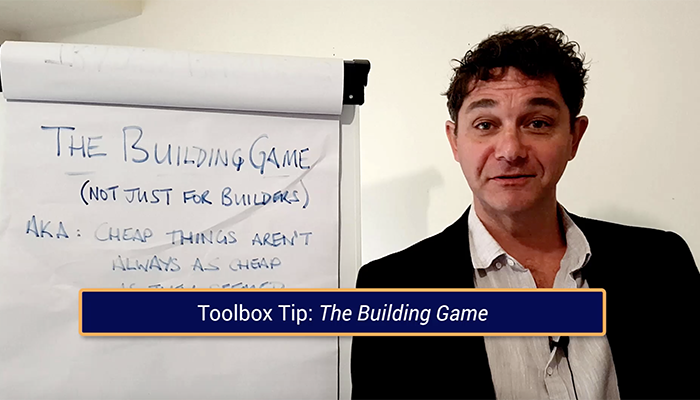 It’s a video about Price and Risk (you could call it Episode 2 if you like).

I spoke last week about how price and risk are very intricately related for your customers. A cheap builder or a cheap trade for a project comes with a lot more risk than a more expensive trade –  one who’s included everything, who you can trust and rely, and comes with longevity and all those other things.

I’m not going to dig into that too much now, (it was in the other video). I do want to point out that I don’t necessarily mean that all expensive things are better than all cheap things, because that’s very clearly not true. But there is a correlation in our minds about price and value, and that risk of something being significantly cheaper is very high.

Also, it’s your job to point out the risk that people take when they buy something cheaper. You can’t prove that the other guy is rubbish, but you should be educating your customers about what to look for so they can meaningfully compare the cheaper solution with your somewhat better solution, or offering, or package. And that’s your job in your sales process.

So today, I want to talk about the ‘Game’. And like I said, it’s not just for builders. It’s for all trades, and it’s known as cheap things aren’t always as cheap as they seemed at first.

The customer, of course, being uneducated in such matters:

That kind of thing. We all know this occurs.

Has it happened to you? And I don’t mean have you been a victim of it so much as have you lost business to somebody else playing this game? I bet you have.

I believe it’s relatively common. And one of the difficult things about it, from your perspective anyway, is that of course, a customer stuck in that slightly unpleasant experience hasn’t got the first builder, the good guy, to check with. He’s running now, talking to the builder he’s stuck with, and the customer is having a poor experience, probably a damaged relationship, and quite possibly ends up paying more than they would have if they’d chosen the more honest tradesperson or trades business in the first place.

So all over, it’s a big shit, apart from the unscrupulous guy who’s making his money at someone’s expense.

So what should you do as the honest builder? I’m assuming I’m talking to honest builders and honest trades businesses working with consumers or businesses or even corporations and you want to prevent them from making the wrong choice of not choosing you, and getting caught by this building game and ending up with a poor experience. And of course, you get to win by winning more customers.

There’s only one thing to do. I’ve written it down just here.

How do you counter it?

So at least, they have a choice to make. They can take this other guy and risk that he’s playing the game or they can work with you and not have that risk.

And of course, you need to make sure that your quotes explicitly include everything that is included and is written properly, and appropriately and reassuringly.

Of course, that doesn’t sound like an easy silver bullet and not many of the things I teach are easy silver bullets. I don’t think there are many of those things around. If it was all easy, everybody would be doing it and it would be lovely. But business isn’t easy. There is work involved and a bit of thinking.

So what do you need to do?

*Note: I say your sales process and your proposal documentation, not your quote. You should be writing a proposal, not a quote.

That’s a topic for another day.

You need to be educating your customers. You need to document this stuff in your proposal. You might give them paperwork to take away and read so that they can go back and look at it and have this proper understanding of how to compare trades businesses.

Now, if you want help with that, of course, you’re in the right place. I’m the person who can help you and if you do want me to help you, there’s a link below.

Book yourself a 10-minute chat with me and explore whether this is something I can help you within your business, with my coaching because, of course, that’s what I do.