It’s really easy to not properly understand what your employees really cost you or your contractors. And that becomes a problem when you don’t charge enough for them.

So what I’m going to try and do today is help you understand and get some clarity on how much they actually cost and how much they actually cost you, not just in terms of the hours that you pay them but the hours that you can get paid for them and relate that to how much you charge in an hourly rate that you charge out. I think that’s a meaningful equivalency for us to think about here.

(This is a long video, I think it’s about 8 minutes so here’s the short version if you can’t be bothered with all that).

So let’s get stuck into the calculation. 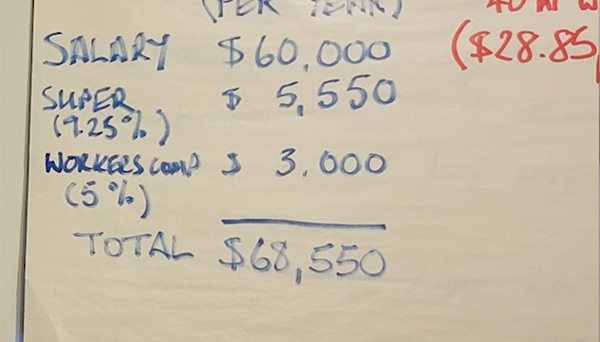 I’m going to work out the cost of an employee per hour that you charge. So we’ll start with an employee… a permanent employee.

Well I’m finished. (This is so much fun).

Most trades people need to be given a vehicle in order to properly do their work. Cars cost about $12,000 a year. Think about the lease, the insurance, the Rego, the tyres, the petrol, the maintenance, and you’re talking $12,000 so divide that by 1,736 hours and you’ve got to add another $6.91 per hour, so that brings out hourly rate that you pay them up to $46.39. 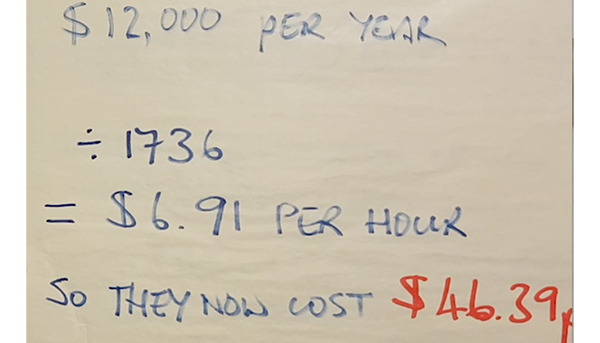 But wait, I still haven’t finished. Do you actually get to charge them out for 40 hours a week? I don’t think so. Do you have systems in place to measure it for a start or are you just saying, “yeah I think I do Jon”? Because I’m going to tell you I’ve never met anybody who is doing this properly.

Even the best businesses are lucky to get 80% of the time that they’re paying their staff back as hours charged.

So let’s be generous and say your guys do 80% on average. 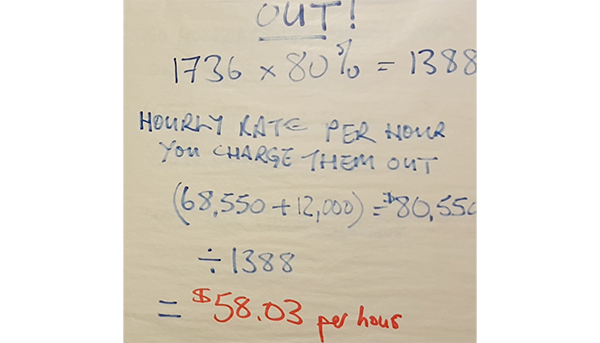 If you’re charging $50.00 an hour, you’re in a whole heap of pain, aren’t you? You’re charging $65, you’re not doing real well because remember that the gross margin, the $65 minus $58, that $7 an hour, needs to pay for the rent, all the overheads of your business, the rent for the office or the shed, the admin staff, your salary, and your vehicle, your insurances, your marketing, your accountant, your expensive business coach (!) which you should have by the way, your tools, your IT, and your software, that’s before you make any profit. So $7 margin an hour, you can have to have a lot of guys working a lot of hours charging out a lot of hours, before you start to get your money.

I’m going to stop because how much to charge and how to charge more are different topics and I’ll cover them another day.

I’ll just quickly run by the same calculation for a contractor.

So here’s a contractor because I know what you’re thinking, “Oh I’ll put them on contract, I won’t worry about all that shit.” But what happens is you don’t have any holiday pay to worry about or super or workers comp and they bring their own vehicle but they charge more per hour and it kind of balances out. 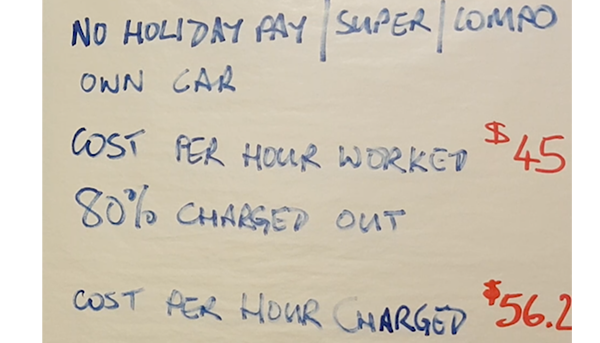 So I pick $45 an hour, I don’t think that’s unreasonable to be paying a subbie or contractor. 80% charge down again, that same rule still applies, you pay them by the day or the week not for every hour they clock on and off, so the cost per hour charge becomes $56.25 again, almost the same.

I had a client who got pinged by the ATO and he got a $50,000 bill and they audited him for the next 3 years as well so he couldn’t get away with anything else. So it was a significant risk he took and that’s before you consider the fact that what you’re saying when you’ve got an employee who you really only pay as a contractor is fuck you a bit, we don’t really care about you, you’re not really one of us, you’re not really on our team, and if there’s no work on Monday, you won’t be getting paid.

So you know, understand the impact that has on the culture, and on that person’s loyalty, and on how your team works as a group.

Do you know how profitable your jobs are? Every job?

Do you know how profitable your guys are or your girls and everyone or every working unit that vehicle and 2 people?

And if you’re all smart and clever, and you’ve got systems in place to measure this  and you know you’re doing a great job, comment that and tell me and I’ll be impressed!

And if you don’t really know and you kind of hope, then comment that and fess up because I think that would be interesting to see how many of you are on which side of the fence.