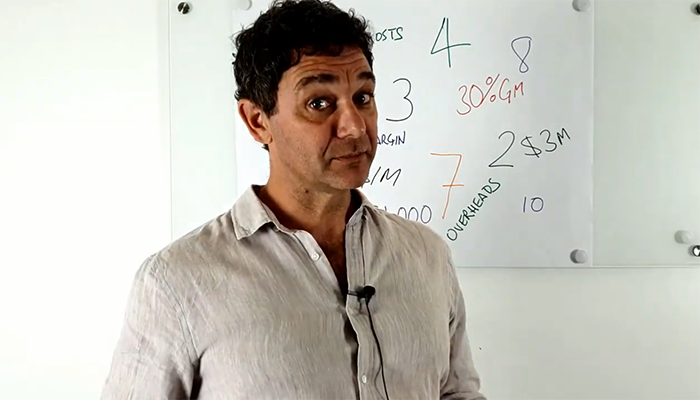 Know Your Numbers (Episode 1) – How well do you know your numbers?

(They’re pretty important and you should know them.)

Lots of trades business owners ignore them or keep an eye on one or two and think that’s probably enough.

But it’s not enough.

I’m running a short series on ‘Knowing Your Numbers’– which numbers to know, what they mean and how to use them to make your business more profitable.

I’m doing it because I’ve built a tool to help my coaching clients track their numbers and make those decisions and I’ve built a marketing program around it.

And my marketing works a bit like this: I’ll give you a bit of my knowledge and I hope that some of you go, “That’s pretty good, I think I’ll have some business coaching”.

That’s what is going on here. I’m sharing a bit of what I know so that some of you will go, “Sign me up for some coaching please Jon”.

This is about showing you why numbers are important and getting you excited enough to download the ‘Know Your Numbers’ workbook.

To get the tracker, you do have to share it with 3 trades business owners — that’s how the campaign works.

I’m going to talk about which numbers you should be keeping an eye on and why.

I’m going to tread lightly and I’m not going to dig too hard into that (that’s for the training video).

I’ll tell you why they’re important and tell a true story about one of my clients and how it worked.

Before I get into it, I want to make a point.

Lots of trade business owners can be intimidated by the numbers like profit and loss reports, balance sheets and things like that. I want to say they’re not  that scary – they’re just numbers. You work with numbers every day.

But if you don’t understand the profit and loss report I can help you if I’m your business coach.

And if you don’t want to work with me then ask the right questions to your accountant or your bookkeeper and they’ll help you as well. I’m sure they’re not mean people. I’m sure they’ll give you the time if you ask them to.

The Big Numbers — Revenue and Profit.

Over the next four videos, I’m going to talk about a few different numbers, but today I’m going to focus on what I call the ‘Big Numbers — Revenue and Profit’.

Revenue is sales, turnover, or income.

They mean the same thing — money that comes in from doing work.

Generally, we imagine that more revenue is good and it means more profit if everything else is working okay. But I’m going to say it’s worth checking because making more revenue that’s not profitable is a waste of time.

So in the tracker, we track revenue.

The gross profit is the difference between your revenue and what you call your cost of sales — which in a trade case is your labor, materials and any subcontractors. They’re your hard costs or your cost of sales.

So when you do a quote, you’ve got materials and labor plus your gross margin making them what your sale price is. And if you say, “My gross margin is 25%”, we might expect to see your 25% gross margin when we measure revenue and gross profit.

If we don’t, something’s gone wrong.

Let’s assume you’ve set your bookkeeping system properly so that it’s accurately reflecting those cost of sales — labor, materials, and any subcontractors.

Maybe you’re quoting is wrong. Maybe you’re discounting or maybe your guys or girls are taking longer than you think. Maybe subcontractors are charging you more than you thought.

A number of things could be going wrong but if the numbers are not the same as what you think then something has gone wrong and you need to go and find out why and then fix it.

Here’s a story — I worked with some builders.

We went deep and a few things were happening. They were discounting sometimes or second-guessing themselves and reducing the price in response to perceived pressure from their customers. They were quoting using an estimator based on metered rates.

We didn’t really know whether he was actually putting a 20% margin in there or not, so we weren’t sure that 20% was doubtful from the start.

They were driving around a lot between small jobs when they took on a small job like bathrooms that was costing a lot in driving time, which is uncharged.

They were also doing supervision and project management, but it wasn’t in the job so there’s a whole heap of additional hours spent on the jobs they weren’t getting paid for.

There were a few things to think about and what we’ve tried to do is put prices up. We started charging for project management and we’ve had quotes accepted. We’re starting to win jobs with additional costs put in them so we’re feeling confident that there’s more profit to come through.

And this is quite recent. We haven’t seen it come through in the figures yet, but we’re expecting to see that come through because we’ve had the higher pricing accepted. We’re looking at reconciling their quotes and the finished jobs and making sure there’s 20% in there.

That’s a job we’ve still got to do.

That’s a true story. It’s a real client. I can put you in touch with them if you don’t believe me. They’re in Sydney and this tracking of their revenue and their gross profit has made an actual difference to their business.

They’re in much better shape than they were before.

So that’s a little story to illustrate it and bring it home to how it can work.