Tradie Mistake Number 3: Not Being True To Your Word 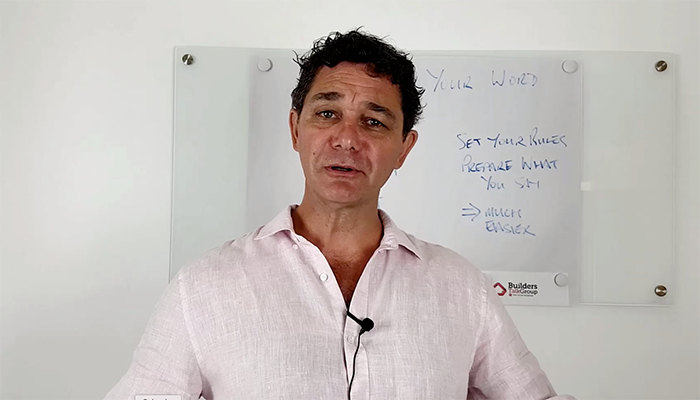 Tradie Mistake Number 3: Not Being True To Your Word

Tradie mistake number 3 — Not being true to your word.

I’m on a bit of a roll with this stuff. I’ve already called people out for failing to show up to potential jobs or quotes, and for not showing up to meetings that they’ve organized.

That’s damaging the opportunity to win that job, meet that prospect, get business coaching, or close a deal and it’s damaging you and your reputation.

Word gets around and it’s not a good thing to be known as a person who doesn’t show up.

Almost everyone does this from time to time – Not being true to your word. It’s common human behavior and the reason it’s common is because we want to avoid social discomfort.

The social discomfort comes from saying, “No” up front when we’re confronted with this opportunity. So what happens is somebody says, “We need a quote” and you know it sounds like a sh*t job. Or it’s possible that your busy on site and it’s inconvenient to stop the job and go and do the quote that you might not win all. It’s only small. Or, you don’t want the job in the first place but you say, “Yes, I’ll come” and then you don’t bother going.

And what you’ve done is saved the discomfort for later but pissed somebody off and damaged your reputation. So you shouldn’t do it.

A lot of people don’t do that because it’s challenging. You’re going to annoy somebody. But you should.

Part of what I coach you to do when I’m coaching people to grow and scale is to qualify out of opportunities. And that’s exactly what I was just talking about if it’s not a job that suits you or one you don’t think you can win. Don’t say, “I’ll quote.” Say, “This doesn’t suit us, we won’t be competitive. It’s not the kind of work we’re good at”. Introduce them to somebody else. Give them another number to call or a name to call.

And that’s being mature and sensible, and not setting yourself up to disappoint people, and damaging your reputation because you don’t want to do the job.
So this also involves saying NO.

I’ve even had people say to me, “If I don’t want the job or if I don’t like the person, I quote high so that I won’t win it. Or if I do win it, it’s worth it because I’m making all that extra money.”
And I think that’s silly. You’re wasting all that time on a quote that you don’t even want to win when you should be open and honest, and straightforward and upfront that it’s not suited for you.
You can do that without offending people. This is the same thing. It’s not being honest or truthful and I don’t think you should do it.

If it’s a kind of job you don’t want when they’re speaking to you on the phone, tell them “That’s not what we do”.

I do this as a business coach. I’m very clear who I can coach and who I can’t. You have to:

And if you don’t fit that, I’ll tell you and we’ll probably happily agree that it’s not for you and we shouldn’t waste any more time than talking to each other.

You should be doing that with your customers.

People don’t take offense if you communicate openly, honestly, and clearly. They’re usually pleased and grateful not to have wasted their time or yours.

Here’s what you need to do:

If you want me to help you script some of this stuff and define what business you do, you know what to do.