Tradie Mistake Number 2: Not Being In Charge Of Your Time 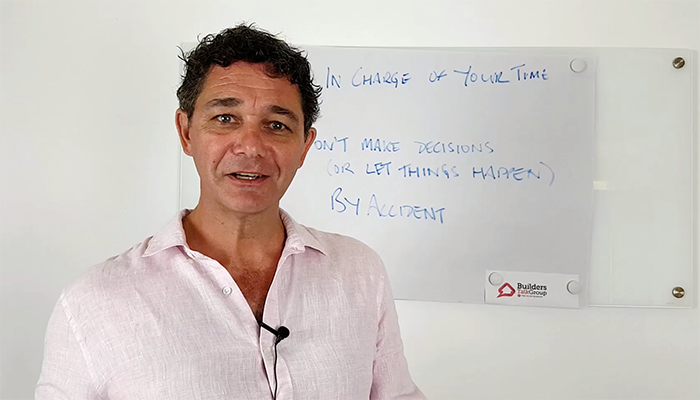 Tradie Mistake Number 2: Not Being In Charge Of Your Time

Tradie Mistake Number 2 – Not being in charge of your time.

In the previous video, I talked about not showing up for pre-arranged appointments, particularly for quotes – when you’ve made an arrangement to turn up and do a quote, and you don’t, and how that’s a terrible waste of your marketing money and bad for your reputation.

I’ve talked about it from that perspective and from your customer’s perspective, and how frustrating it is but it doesn’t just happen with potential jobs – “Can you come and quote?”

It also happens with other types of meetings. It happens to me sometimes. People book the free strategy session to see about coaching and then don’t show up.

It happens a lot less when people pay me for my time, which isn’t a surprise. And this brings me to my point that people pay me so that my program can help them change their businesses and turn it into a better one.

And the thing that’s going on for people when they don’t show up for a meeting either with me or for something else is this: A meeting with me might be great — it might change your world and it might not. It’s an unknown quantity so it has a certain level of importance in your mind. It got some risk attached to it as well.

Now, they’ll either forget to show up because they’re disorganized and they didn’t write it down. Or they didn’t have a system so they forgot to come.

That’s possible and it’s common. Or when it came to it, they prioritised something else by finishing the job or doing some other work in their business, and they decided that that was more important than meeting with me so they didn’t bother showing up.

Now, I’m talking in a later video about how it’s confronting to ring up and say, “Jon, I’ve changed my mind, I’m not gonna come”. But that’s what you should do — you should be prioritising. Prioritising is fine.

I’m going to teach you and encourage you to prioritise where you put your time in your business.

But what I want you to do is prioritise on purpose, not by default, or by accident when you’re busy and it doesn’t feel very important now. And now, because you’re busy on-site, it feels less important because it would be fiddly to pack up your tools and come back again tomorrow. That’s the wrong reason to not show up for a meeting, whether it’s with me or whether it’s something else.

This is what I want to warn you against.

A meeting with me falls into the same category as many of those other things you can and should be doing to grow and scale your business:

All these jobs are easy to prioritise rather than finishing a job on site or something else. They’re easy to push aside and defer.

And I use myself as an example but really, all of these have this in common. They’re easily displaced by this other stuff and you can continue to defer them without suffering immediate consequences.

The worst thing that happens if you miss a meeting with me is you get a grumpy text saying, “Where the f%#k were you?”

You might get a second one because you did, after all, say you wanted to meet me but after that it goes away. I’ll disappear, I’m not going to hound you forever. I’ve got things to do. And so it’ll slide away and the opportunity to do business coaching will slide away.

There’ll be no immediate consequences except that maybe in a few months, you’re going to never hire that business coach so it will cost you that opportunity.

The same is true with a quote you don’t turn up to. It’s rare that they ring you and say where were you to just call someone else.

So the pain doesn’t happen to you. You allow yourself to keep getting away with it.

But what you’re doing is you’re making these decisions about where you go by accident, not deliberately, not overtly or proactively.

And the same goes for following up quotes or doing the quotes. There are costs that are hidden.

My job is to not let you hide that stuff from yourself and to help you make those positive decisions:

All of these will do you good with your customers and will help you do the important things that will drive your business forward.