What To Do When Someone Says “Your Quote Was More Expensive” 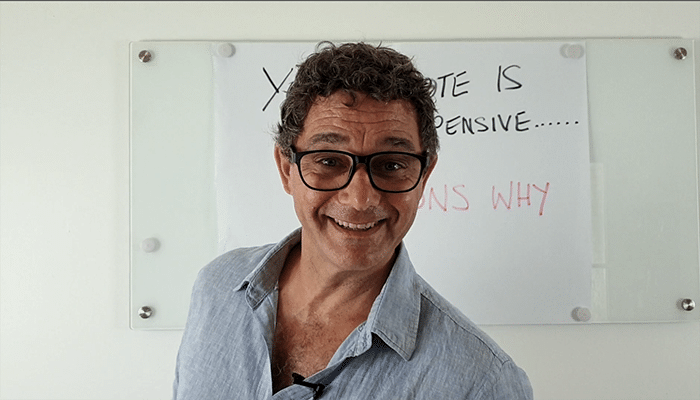 What To Do When Someone Says “Your Quote Was More Expensive”

When someone says “Your quote was more expensive”

This was prompted the other day by a Facebook post in a Carpenter’s Talk Group by someone who’d lost out on a job to someone cheaper. And he was concerned.

He thought he priced his job fairly, and he wondered how another builder had been much cheaper than his price. And he was checking his price in the group and his question really was, “I’m being reasonable with the way I’ve priced it”.

Now when this happens, the customer says, “Someone else was cheaper, and we’ve gone with them not you,” a whole heap of possible scenarios exist.

I want to explore them now because I think it’s interesting and I think it will help you if you find yourself in this position like this guy did.

This is my favorite one, of course.

They could not be telling you the truth. If they’ve chosen to go with someone else, it’s almost never because they were cheaper than you.

That’s kind of face-saver that people say instead of the truth.

Can you imagine someone saying, “We went with someone else because my wife thinks your eyes are too close together”? Or some other reason why they didn’t like you.

Or, “We were just price checking the builder we prefer. Their price is actually slightly higher than yours but it’s close enough, and we like him better. We might try to make him match your price. Thanks for all your hard work”.

Well how about this? This is from somebody who’s working for a builder in a bigger business, “I have to get three quotes, it’s my job but I prefer to use this company. I get three quotes, I make sure my preferred builder or subcontractor or whatever is within query and then I award him the job”.

That’s a possibility too. No one says that, do they?

You get the idea. The easy lie of “you missed out because you’re too expensive” is likely not really the truth.

You may not have won for other reasons.

I’ll talk about not winning for other reasons separately in another video.

I’m also talking about a situation here where you didn’t win. You could get the same comment, “You’re too expensive” where they’re hoping you’ll reduce your price to match or get near the lower price.

These same scenarios are potentially true.

I’ve got six other scenarios to describe.

There’s something about the job or your trade that you don’t know, or that you’ve misunderstood or your rates are higher than everybody else’s and you’ve got this far without knowing.

Somewhere along the way you’ve charged more than you should have or more than another competent, decent trades person or trades business.

This is the one you’re mostly afraid of. This is the one that scares you – that you’re consistently wrong and you’re missing out on work because of it.

I’ll make another video about this another time about how to know if your price is on point.

So that’s a possibility – you’ve overpriced.

3. The other business is cocked up, and they’ve underpriced.

They’ve forgotten something or messed up their maths.

That’s a possibility too, isn’t it?

4. They (your competitor) don’t really understand how to price.

They’ve come in low and maybe they’ll be not very profitable.

They’re a one-man show with no overheads and they are pricing to make a living.

That’s a bit different than making a mistake. They just could be a business that’s different to yours.

5. Maybe your competition really wants this job and is discounting to win.

For some reason you don’t know about – to get in the door for future work or to boot you out so that they can keep all the future work. Maybe they will raise the price later.

Maybe they’re quiet, and they’ve got people on staff who need to be paid and they’d rather take a low-profit job that pays people’s wages than have them sitting there doing nothing.

6. Maybe they play a dirty game and come in with low quotes but exclude parts of the job so the final cost ends up being much higher than the quote.

They hope to make up their margin on the variations and that’s a very old game.

It’s a dirty game but it’s an old game. People do play it and customers are the ones who pay the price.

Maybe some plumbing backpackers. I was one of those.

They cut corners and compromise quality or safety. Or they buy cheap materials or they have stolen materials. They weren’t properly insured. Or they won’t be around to fix any issues down the track.

All of these are possible reasons that your quote is higher than someone else’s.

There are probably others. If I’ve missed something obvious or funny, feel free to drop it in the comments.

Now, when this happens to you, whether it’s when they’re telling you didn’t get the job or whether they’re using the same comment to encourage you to drop your price and win the job, it’s very difficult for you to know what’s really going on.

This, of course, is your opportunity as a salesperson for your company. If they’ve already awarded the contract to someone else, you’re too late for this one – cut your losses, move on. But if they’ve not yet awarded the business you have an opportunity to explain some of this stuff to them and help them out and position your business.

There’s the good guys who aren’t going to do these terrible things, but you’re already on the back foot. You’re coming from a position where you’re already more expensive and your helpfulness is already damaged.

How to manage these scenarios

So what we should do is:

Do this early in your sales process – in your meetings, when you talk to people before you do your quote, and document it in your quote when you present your quote and explain it to them as you deliver your proposal.

And I mean proposal, not just a quote.

If you’re early in your sales process you are preempting the ‘your quote is more expensive’ and the kind of implied comment for the same stuff.

Let’s talk about your price.

Explaining your rates and how you work them out means they can compare your quote to another one and see what’s different. They can look for a mistake, and they can find one.

Or they can look for the difference and say, “Look you’ve included this” and you can have a discussion. Same goes if it’s your competitor’s mistake.

Understanding and comparing rates, inclusions and exclusions, and the process for calculating the final price helps your customer get clarity and avoid a situation where they’re working with a supplier who’s made a mistake.

The third scenario where your competitor is cheaper — there’ll be a disadvantage in stability or risk.

A one-man show is much more likely to suffer interruptions to a job than a business with 5-10 people.

You can point out the risks of the cheaper quote if everyone understands it.

If your competitor really wants the job, this sounds like a win for the customer and it might be, but how confident are they that this is the case? You’re going to help your customer figure that out.

The dirty game of course, is very unnerving for the customer.

They don’t want a delay. They don’t want to get a quote for X amount and find it’s significantly more by the time they get to the end of their project.

And the corner-cutting people, the ones who are going to quote cheap and do it cheap – the customer is going to get a much worse outcome than they want.

I’ve written this knowing that the customers you’re explaining this to in the earlier part of your sales process might not care.

But what you’re doing when you explain this is you’re building a relationship and you’re maximising the chance that your customers understand what they’re getting for their money.

And they understand that other quotes might not be giving them the same job for the money, and they can go and check and make an informed choice.

You’re doing a good thing for your business.

You’re maximising the chances that they’ll work with you.

And you’re doing a good thing for your customer which never hurts.

It’s not even difficult.

I know it sounds like a lot of work. There’s a bit of work. This video took me a couple of hours to write.

If you’re my client, you might spend a few hours watching the video training and talking to me, writing your sales process and what you say at each stage of it and writing your proposal template.

But once you’ve done all that, you can reuse it over and over again for every sale that you make.

You’ll win more jobs and you’ll probably win at the higher margins because you won’t be competing so hard on price.

If you think that improving your sales process is worth some effort, maybe I can help.