Tradie, What Happens If You Get Sick? 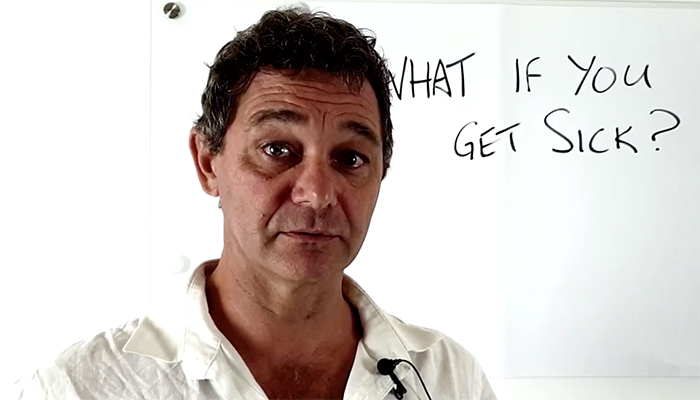 Tradie, What Happens If You Get Sick?

What happens if you get sick?

It’s a scary question, isn’t it?

For most of my customers and most of the tradies and the builders who come to me at least at first, the answer to that question is not very pretty.

A day or two is no problem – you can get by.

You’ve got a holiday, you might have to do some work while you’re away but you can keep things going.

Mine’s a bit the same. I’m the only coach right now so If I’m sick, no one’s getting coached, are they?

But my business will survive a holiday and a few days if I’m sick. I can shuffle people around if I miss a few days. And if I have a holiday, my customers are understanding. They want them too.

But real sickness would be a challenge for me and for most of the people who come to me.

Most of my clients and I are on a bit of a plan to make our businesses less vulnerable.

And the reason I’m bringing it up today is this has just happened to somebody.

It just happened to somebody who was about to start coaching.

They said, “We’ll start in February, after Christmas, and we’re going on holiday after to America. After that, we’re going to start”.

We became friends like what we often do in my business, anyway.

Of course, I’ve called them to set business coaching up for February and said, “How was Christmas?” expecting the usual pleasant conversation and got a terrible response.

After our workshop in November, they’ve gone to visit family. He, the main guy, (it’s a team of three people) has fallen sick. He’s had a ruptured bowel and got sepsis and he nearly died. He came quite close to death and a major surgery saved him.

He’s okay, but he was in the hospital for weeks. He’s still not properly back at work.

He’s not allowed to lift more than half a kilogram in weight.

And it’s a physical job. They make glass shower screens, so he lifts heavy shit. He can’t do that part of his job still and it’s late January now.

So, he’s been out of action for 6 – 8 weeks, and he’s going to be out of capacity for somewhat longer and his wife and son spent Christmas trying to look after him and doing all the work that was scheduled for Christmas.

It’s been very stressful for them. And they’ve managed to get most of the work done.

They think they’re going to catch up to the backlog of work reasonably soon but they’ve done NO marketing and NO sales work.

So now of course, they’re anxious about an upcoming quiet period and also concerned that their builders, because it’s a subcontract work for builders, are going to be worried about the reliability of supply

So it’s had an impact. His sickness has had a significant impact on their business. Obviously, they’ve put the coaching off for a bit.

And we laughed and they said, “If only Jon we had all our systems in place”, and we laughed because of course, that’s what they’ve joined the coaching to do.

Recommended Reading: 1 Thing You Can Do To Avoid A Quiet January In Your Trades Business.

It has a big impact and it made me think about how vulnerable our business is (mine included) to the key person being unable to work for any longer than a short period.

Most of our businesses, while we’re still young businesses, are very dependent on us and won’t continue for very long if something like that happens.

How to make your business run without you

Now, I’m thinking about how I can reduce my business dependency on me.

I think I want to encourage you to do the same.

And there are two things you need to focus on:

You need to have stuff written down and not just in your head.

They know what to do because there’s a system.

They know what to do because the information pertinent to a particular job is in the system, and they’ve been trained a bit. You’ve spoken about what has to happen.

They can look up the procedures and refresh themselves if you train them for a while.

You need to grow enough so there are people there all the time so that if you’re absent, they can take over.

You need to have more than just you. If it’s just you and the apprentice, it’s going to be difficult.

If there are 5, 6 or 10 of you and somebody working in the office as well, it’s quite likely you have got somebody who can step in, who you can train, who can spend the time to learn and cover for you if you’re not well or if you’re  away.

So that’s my plan.

Our systems documentation is going quite well. I need to grow a bit more so that we can have more than one coach so that if I’m away, there are people who can cover and look after my customers.

Systematising and growing — they go hand in hand.

Of course, I can help, that’s my job. I’m a business coach for trades and builders and I would like to help you.

If you think you like me to help you…